Source Energy as a Proxy for Carbon Emissions

When I started my career, the prevailing wisdom was that we were going to run out of energy. This notion continued for decades and was formalized in the concept of “peak oil” which sprung from the work of M. King Hubbert and later Kenneth S. Deffeyes. What we understand now is that we seem to have plenty of oil, gas and coal, but if we were to burn it all, we will heat the planet to levels not experienced in 50 million years, threatening the health and welfare of our children and grandchildren who will have to pay trillions of dollars to build sea walls, pay for flood and fire damage, and address other impacts from global warming and the resulting climate change. Click here for a blog on the social cost of greenhouse gases.

Building energy efficiency standards emerged from our concern over excessive energy use, as opposed to carbon emissions, and were accelerated by the 1973 oil embargo. One of the first standards was ASHRAE Standard 90.1-1975, which became a model for many other energy codes, including the one in my state of California. This first version of Standard 90.1 had a performance approach (called system analysis) that permitted compliance if it could be shown that the site energy of the proposed design was less than or equal to a clone of the proposed design that met each and every prescriptive requirement.

While the 1978 California standard borrowed a great deal from 90.1-1975, it used source energy as the metric for evaluating building performance instead of site energy. Source energy was also used in 1979 by DOE in a draft of the Building Energy Performance Standards (BEPS). EPA’s ENERGY STAR program, first introduced in 1992, is also based on source energy.

From the very beginning of energy standards, the metric used to measure energy performance has been a hotly contested issue.  The electric industry has argued for site energy because they can sell more electricity; electric equipment (even resistance heating) performs quite well compared to gas equipment when the efficiencies of generating and delivering electricity are not considered. Of course, the natural gas industry has favored source energy because gas fired boilers, furnaces and water heaters performed better than most electric equipment when source energy is the metric. A number of technical and quasi-technical arguments have been offered on both sides, but it really comes down to which industry (electric or gas) can maintain and grow its market share and which has more power and influence. Both sides were and are deeply entrenched and the battle became nasty.[1]

The battle within ASHRAE over source and site energy continued for about two decades, until a compromise was reached with the 1999 version of Standard 90.1. The compromise was to abandon both site and source energy and instead use energy cost as the metric. Federal legislation requires that states adopt nonresidential energy standards that are at least as stringent as the latest version of 90.1 and goes further: It states that the metric used for performance calculations shall be either energy use or energy cost.[2] It does not say whether energy use shall be site or source.

Staff at the California Energy Commission considered the possibility that basing a building standard on carbon emissions might result in the standard being challenged as violating federal law. In response, the California Energy Commission is using hourly source energy in addition to time-dependent valued (TDV) energy as the metric for performance method trade-offs in the 2022 standards, scheduled to take effect at the end of the year (January 1, 2023). The CEC’s definition of hourly source energy considers only fossil fuel inputs; it tracks carbon emissions almost exactly.[3] The CEC has adopted a source energy-based standard that limits carbon while complying with the federal rules. Let’s call the CEC metric fossil-fuels-only source energy.

The Standard 90.1 project committee and the IECC Consensus Committee are faced with a similar problem as California. There is interest in addressing building carbon emissions, but federal rules are providing a constraint. One obvious solution is to work with Congress to change the law, but spurring action on climate change in Washington is challenging at best and perhaps impossible with existing political polarization.

Another option that is completely within the purview of both the IECC and ASHRAE is to follow California’s lead and adopt a form of source energy that mirrors carbon emissions. Fossil-fuels-only source energy would only consider the source energy content of fossil fuels and exclude nuclear, hydro, wind, solar, geothermal and other generators that produce no greenhouse gas emissions. The standards can essentially address carbon emissions but do it is a way that complies with the federal rules.

Source energy has been calculated in a number of ways over the years as shown in the following table. The differences are explained by the heat rate assumed for renewable energy and nuclear power plants. The heat rate is a term used in the electric industry to characterize the amount of fuel needed to produce a kWh of electricity. Common units are Btu/kWh. The efficiency of the power plant can be estimated by dividing the heat content of a kWh of electricity (3,412 Btu/kWh) by the heat rate.

The fossil-fuel-equivalency method is mostly insensitive to the amount of renewable energy on the grid. If a coal plant is replaced by a wind farm, the source energy conversion factor changes very little; the difference between the heat rate for coal (10,551 Btu/kWh in 2020) and that assumed for wind (8,904 Btu/kWh in 2020). The captured-energy procedure replaced the fossil-fuel-equivalency method for the latest EPA estimates of source energy, and with this method, the impact of replacing coal with wind is greater (the coal heat rate of 10,551 Btu/kWh is reduced to 3,412 Btu/kWh).

The zero-heat-rate method was used to develop the source energy conversion factors published in ASHRAE Standard 90.1-2020 and the International Green Construction Code (IgCC). Renewable energy is even more fairly treated with this method. The source energy input to producing electricity from wind, solar and hydro is assumed to be zero; photons from the sun, the power of wind and gravity that drives hydro plants has no source energy content. Both the captured-energy and zero-heat-rate methods of determining source energy are clearly better than the legacy fossil-fuel-equivalency method, but they still fail to track carbon emissions in regions with a significant share of nuclear energy.

The stacked bar charts in the following graph show the estimated carbon emissions for each megawatt hour of electricity delivered to buildings (scale on the left). A separate bar is shown for each eGRID subregion, ordered from those with the greatest carbon emissions to those with the least. Click here for an explanation of how these estimates were derived and a map of the eGRID subregions. 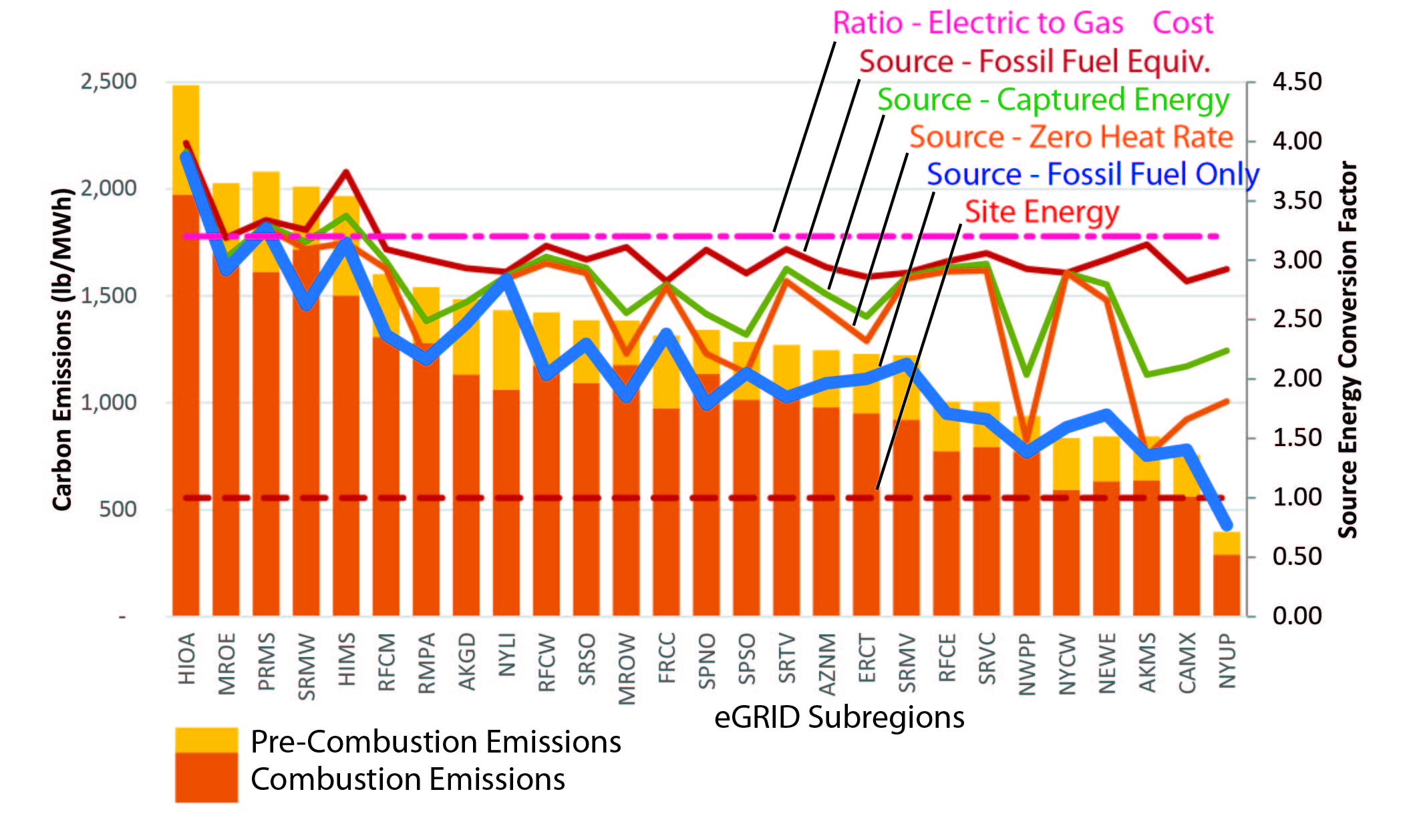 The concept of source energy also applies to fossil fuels such as natural gas, fuel oil and propane delivered to buildings. Like with electric power plants, the source energy includes the heat content of the fuel that arrives at the building as well as the source energy used for extraction of the fuels, processing or refining the fuels and delivering them to buildings by tankers or pipelines. Source energy conversion factors are published in ASHRAE Standard 189.1 and the IgCC; published values are 1.09 for natural gas, 1.15 for propane, and 1.19 for fuel oil.[5]

In order to focus on reducing carbon emissions from building operation, we need a metric that enables designers to more accurately assess the carbon impact of building design decisions, especially the choice of whether to use electricity or fossil fuels for space and water heating. To look at this issue, let’s make some broad assumptions and see how the various metrics compare to the estimated emissions. For simplicity, we will compare electric heat pumps with an average COP of 2.5 to gas furnaces with an AFUE of 90%, and make this comparison for four representative eGRID subregions ranging from high electric emissions to low: MROE, RFCW, SRVC, and NYUP. This is a simple comparison that does not factor in how the efficiency of the heat pump may change with climate. See the chart below. 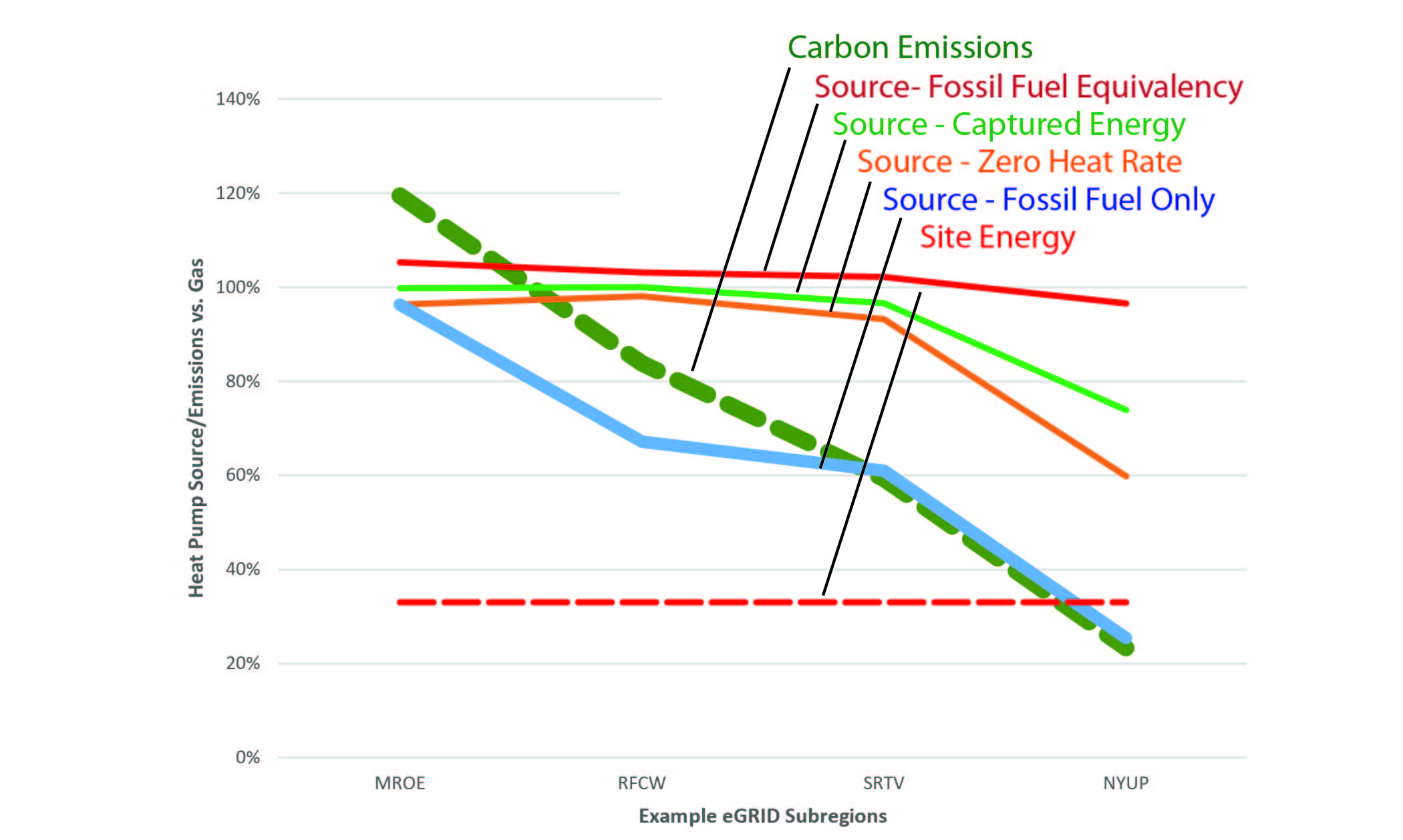 It’s time for our energy standards change focus from saving energy to reducing carbon emissions. Existing federal rules constrain the ability state and local governments to directly base standards on greenhouse gas emissions, but if source energy is defined to only consider fossil fuels, a source energy standard can largely achieve this purpose.

[1]    The inability to resolve the issue of site vs. source energy resulted in the development of a dual-standard in the late 1990’s whereby one level of insulation was determined to be cost effective for buildings with electric heat and a lower level of insulation for buildings with gas heat. The public review of this proposal triggered about 13,000 comments, one of the first letter writing campaigns orchestrated to influence the standard. Every employee of large electric equipment manufacturers was encouraged (or perhaps required) to file a comment. While all the comments were essentially the same, they overwhelmed the ASHRAE process. The electric industry also threatened to reduce support to ASHRAE which resulted in the “San Antonio massacre” whereby all environmentalists whose term was ending were replaced with members who supported site energy and opposed the dual standard. The ASHRAE leadership appointed a new chair to the committee with no previous experience and an obvious bias. The sequence of events was so egregious that the cosponsor to the standard, the Illuminating Engineering Society (IES) refused to accept ASHRAE’s appointment of the chair, their prerogative as a cosponsor and the first and only time this has happened.

[2]    42USC§6297(f)3C.  The credit to the energy consumption or conservation objective allowed by the code for installing covered products… is on a one-for-one equivalent energy use or equivalent cost basis.