Greenhouse emissions from the generation of electricity are responsible for about 35% of total greenhouse emissions in the United States since 1990 (see figure). Each type of power plant has a different level of emissions. Coal plants are the worst with close to 3,000 lb of carbon dioxide equivalent (CO2e) per MWh of electricity produced. Modern gas plants have about half the emissions of coal plants, but are still a significant GHG emitter. Electricity generated by nuclear or renewable energy results in essentially zero GHG emissions. 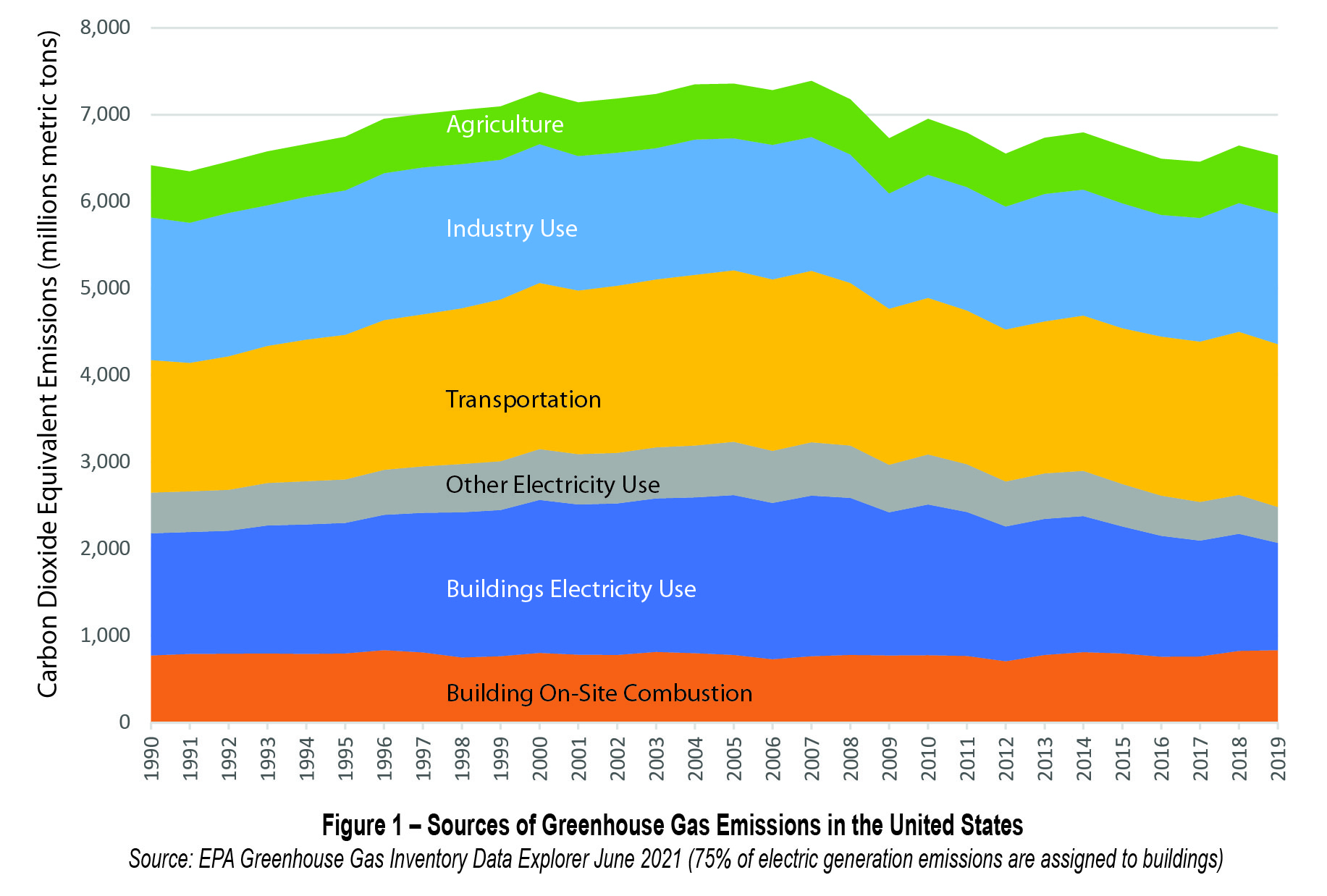 When fossil fuel is burned (at a power plant or in a building), the principal greenhouse gas is carbon dioxide (CO2), but in addition, the combustion process also releases methane (CH4) and nitrous oxide (N2O) in smaller amounts. While CH4 and N2O emissions are smaller, these GHGs are much more potent having a global-warming potential (GWP) many times greater than CO2. An equal mass of CH4 has a GWP 84 times greater than CO2 when evaluated over a 20-year time horizon and 28 times greater over a 100-year time horizon. CH4 has a much shorter life than CO2, which explains the difference.

Emissions at the point of combustion (also called stack emissions) are not the whole story with fossil fuels. GHG emissions also occur before the fuel ever arrives at the power plant. The processes of mining coal, extracting oil and natural gas, refining and processing the fuels, removing impurities, pressurizing and pumping the fuels through pipelines, and transportation by rail or truck all result in significant GHG emissions. These are often overlooked, even by the U.S. EPA and others in their reporting of GHGs. The National Renewable Energy Laboratory (NREL) maintains a life-cycle inventory database (see https://www.nrel.gov/lci/) that provides cradle-to-grave accounting of the energy and material flows into and out of the environment that are associated with producing a material, component, or assembly, including fossil fuels.

Pre-combustion along with combustion emissions are shown in Table 1. The first section of the table shows the weight of the emissions without applying the GWP. The second section of the table shows the carbon dioxide equivalent emissions, weighted by the GWP for CH4 and N2O. When two values are listed separated by “/”, the first number is the CO2e for a 20-year time horizon and the second for a 100-year time horizon. The time horizon of GWP only affects CH4. You will note that most of the CO2 and N2O emissions occur during combustion, while almost all of the CH4 emissions occur pre-combustion. For consistency, the data is presented per MWh of fuel heat content. A MWh represents 3,412,000 Btu. Since MWh’s are not commonly used to measure the amount of fuel burned, the table also shows the pounds of coal, gallons of petroleum and the therms of natural gas that represent one MWh of fuel. 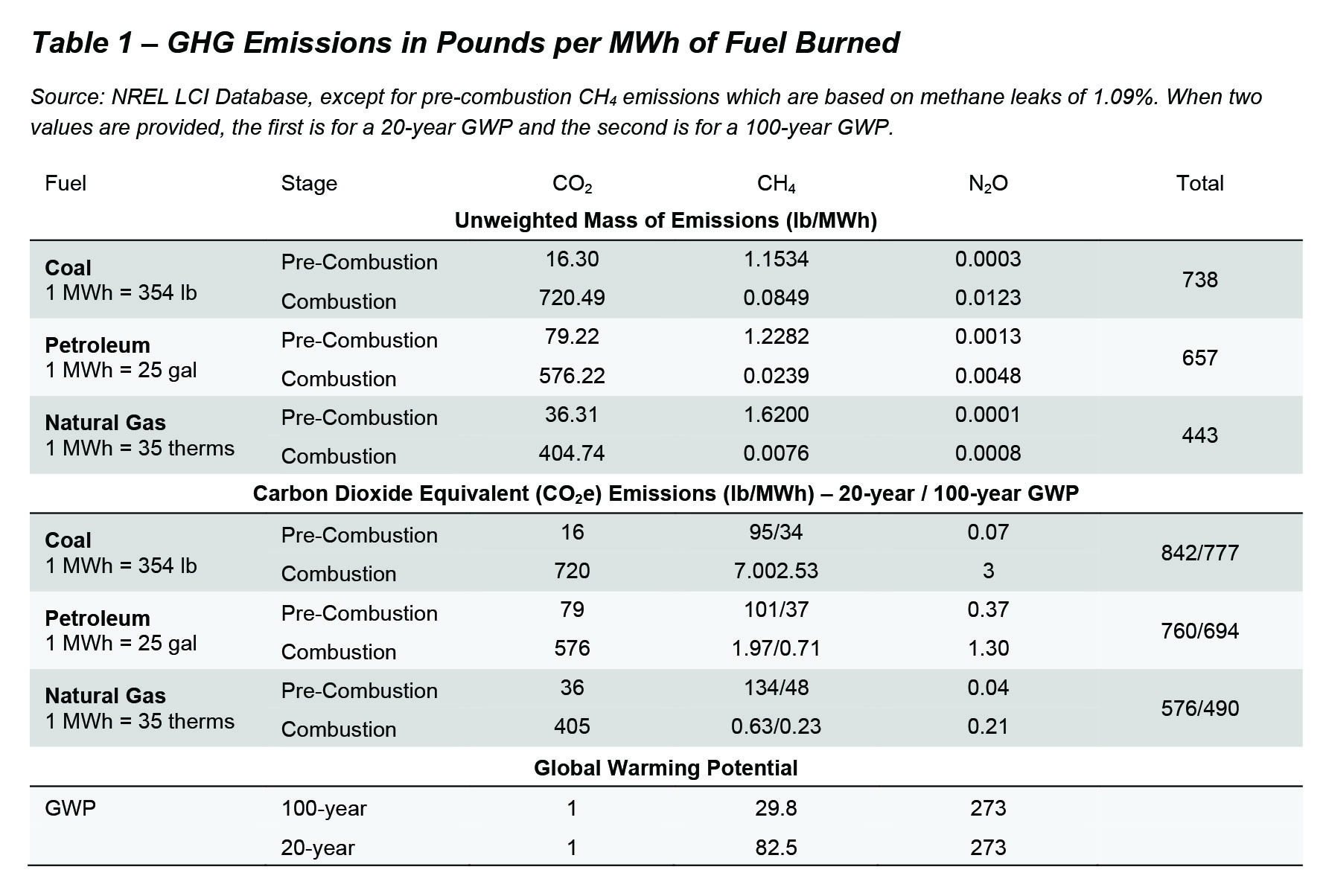 The data in Table 1 represent the emissions that occur when a MWh of fuel is burned. The amount of fuel used to actually produce a MWh of electricity depends on the efficiency of the generator and the transmission and distribution losses between the power plant and the end user. The U.S. Energy Information Agency (EIA) and the electric industry characterize generator efficiency in terms of a heat rate, which is the British thermal units of fuel needed to generate one kWh of electricity. However, the efficiency of the generator can be determined by simply dividing 3,412 Btu/kWh by the heat rate. The heat rate of coal, petroleum and natural gas generators is shown in Figure 2.

The heat rate of coal plants has not changed much in the last 20 years, in fact, EIA data shows that coal plants today are slightly less efficient today than they were 20 years ago. The same is true of petroleum generators, which are fairly rare, except in Hawaii, Alaska and other areas where there are no natural gas pipelines. The average heat rate for coal power plants in 2020 was 10,551 Btu/MWh or an efficiency of 32%. The average heat rate for petroleum power plants in 2020 was 11,135 Btu/MWh or an efficiency of 31%. The heat rate of gas generators has been improving over the last few decades. Most new gas power plants use a more efficient technology called combined-cycle. With combined-cycle gas plants, electricity is produced in two stages. The first stage is to burn the gas and drive a combustion turbine, much like a jet airplane engine. Waste heat from the first stage is captured and used to heat water which drives a steam turbine which makes more electricity in the second stage. The overall efficiency of a well-functioning combined cycle gas plant is less than 7,000 Btu/kWh (efficiency greater than 50%). The EIA estimate of all gas generators for 2020, both old and new, was 7,732 Btu/kWh (efficiency of 44%). 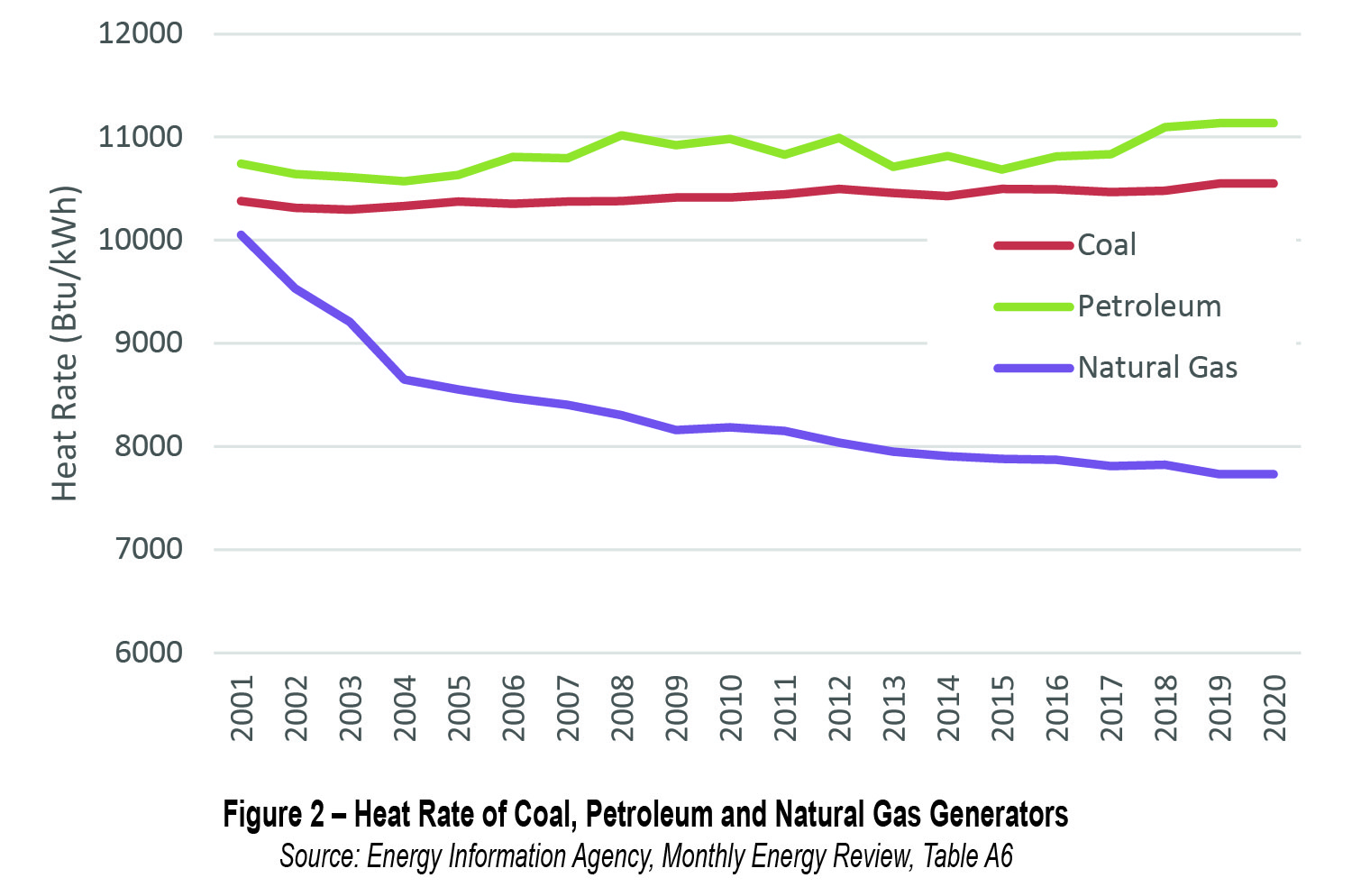 The last piece of the puzzle is an estimate of transmission and distribution (T&D) losses. These losses occur as electricity is sent over power lines and when the voltage is increased or reduced at the power plant and at substations. Figure 3 shows that the losses have been reduced significantly over the last 70 years, mainly due to better transformers and a more efficient electric grid. In 2019, EIA estimated T&D losses to be 5.3%, which translates to a delivery efficiency of 94.7% (100% minus the T&D losses). Since the mid-1980s, T&D losses have hovered around 6%. 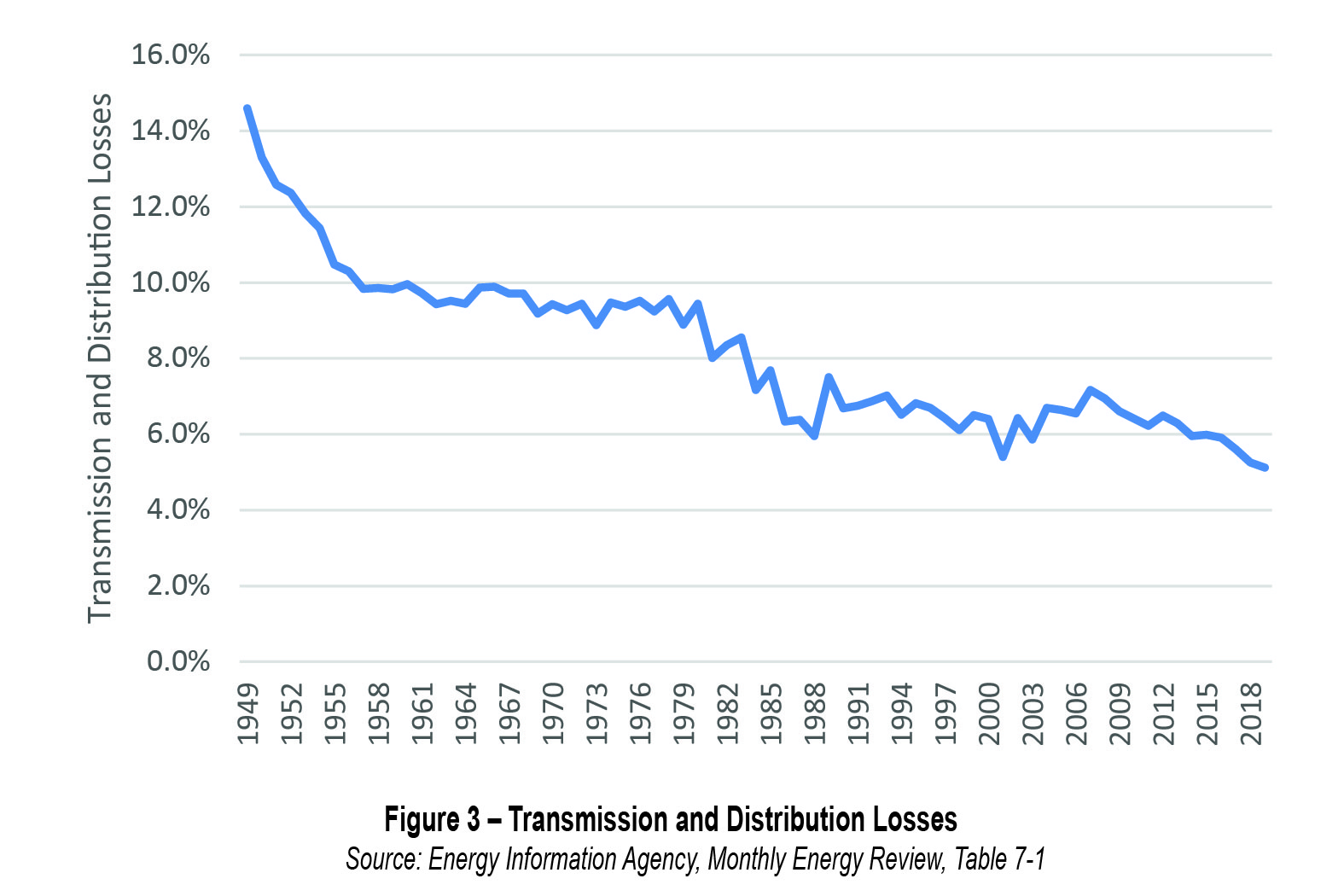 So now we have an estimate of the CO2, CH4 and N2O emissions that result from burning a unit of coal, petroleum or natural gas. The power plant heat rate or efficiency tells us how much fuel is needed to generate a MWh of electricity and factoring in the T&D losses or generation efficiency we can easily calculate the GHG emissions that result when we consume a MWh of electricity from one of these fossil-fuel fired power plants. Based on the data previously discussed in this blog, the total emissions related to coal, petroleum and natural gas generators is calculated in Table 2. 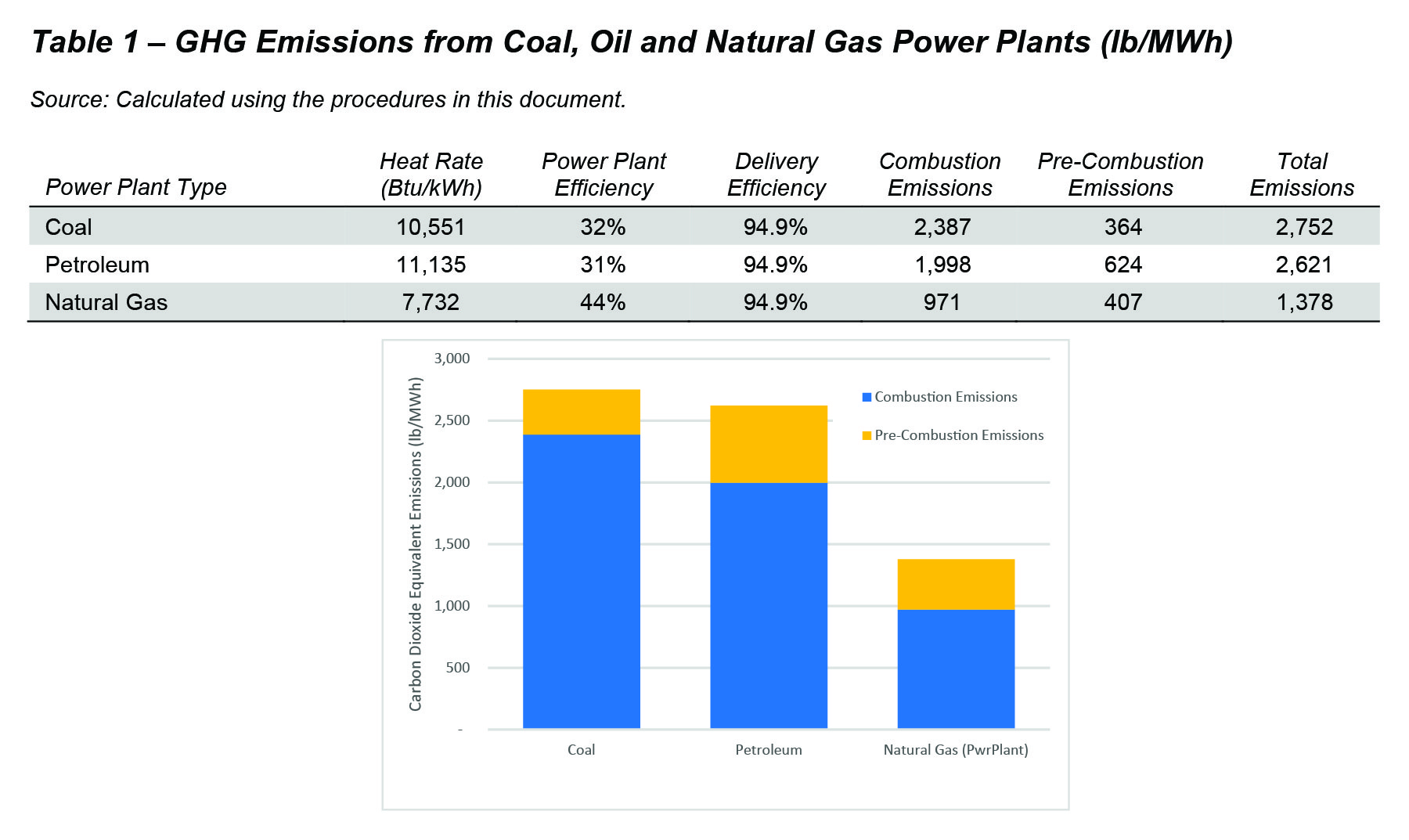 If you know the type of generators that provide power in your area, you can use the data in Table 2 to calculate the average emissions of electricity delivered to your home or business. For instance, in Ohio in 2019, 39% of electricity was generated by coal, 1% by petroleum, and 44% by natural gas. The remaining 17% was generated by carbon-free sources, primarily nuclear with a little wind. The average emissions for Ohio are then 1,705 lb/MWh of delivered electricity. If you are more comfortable with The calculation below can be performed separately for combustion and pre-combustion emissions if desired. The EPA eGRID database has data on the mix of electric generators by state and by eGRID subregion.

The United States Environmental Protection Agency has divided the country into eGRID subregions and for each subregion, EPA publishes the percent of generation by coal, petroleum, natural gas, nuclear, hydroelectric, biomass, wind, and solar. Using EPA’s estimates of generation mix and applying the procedure described above for Ohio results in the following estimates of power plant emissions. 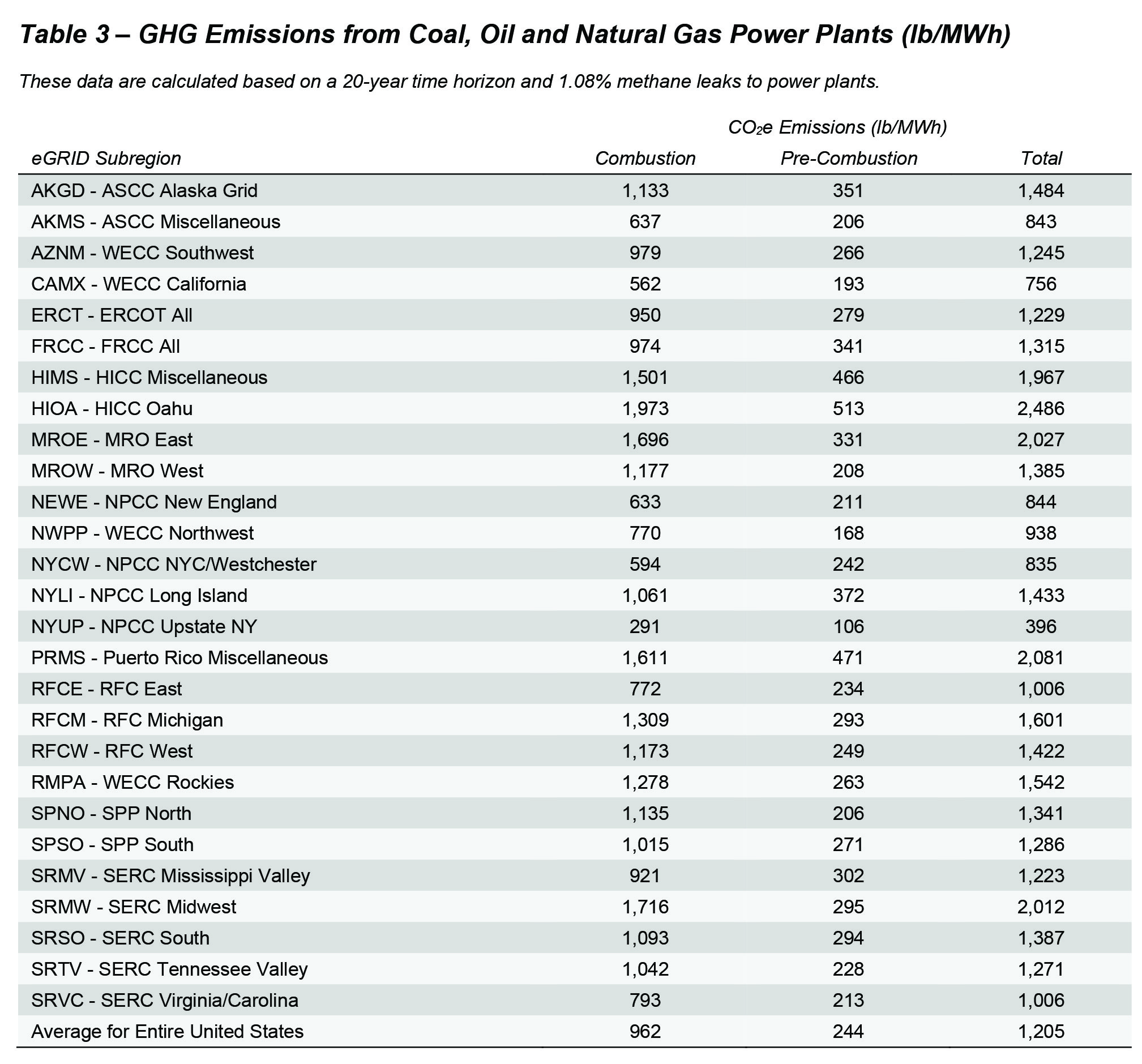 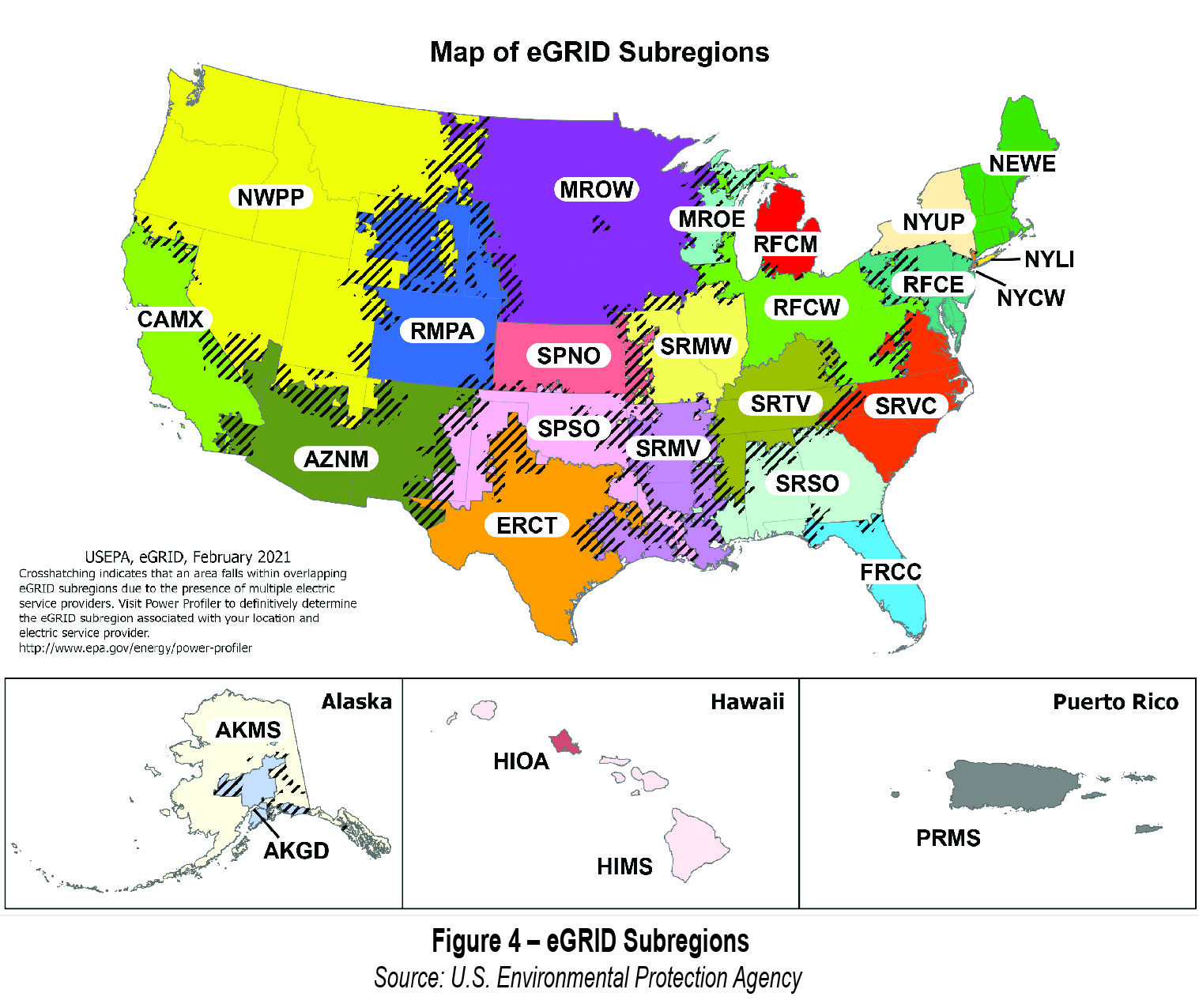 GHG – Greenhouse gas – Refers to all atmospheric gases that contribute to global warming. The principal GHGs from electricity generation are CO2, CH4 and N2O.

CO2 – Carbon dioxide – The primary greenhouse gas produced from the production and combustion of fossil fuels.

CH4 - Methane – a potent greenhouse gas and the principal ingredient in natural gas. Methane is also released as part of agriculture and natural processes.

N2O – Nitrous Oxide – A potent GHG generated primarily from burning coal. A purified version is used by dentists and known as “laughing gas”.

GWP – Global warming potential – The relative warming potential of the gas in comparison to CO2. For instance, methane released into the atmosphere has a GWP 82 times greater than CO2 over a 20-year time horizon.

CO2e – Carbon dioxide equivalent – A metric that combines all GHGs into an equivalent amount of CO2 that causes the same global warming.